By Houston History Magazine on March 29, 2011 in Energy and Environment 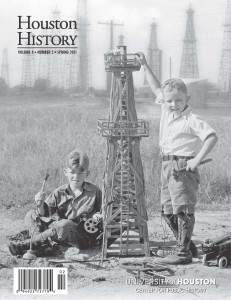 Live in Houston long enough and you’ll learn that wildcats are exploration oil wells and the price of sweet crude – the high-quality, low-sulfur oil used for processing gasoline – is a closely watched economic indicator. But if you just got here or want a refresher on what the oil industry has meant to the growth and development of the nation’s fourth largest city, make sure you order a copy of the Spring 2011 issue of Houston History magazine, “Oil in Houston.”

In it, Editor Joe Pratt reflects on how both wildcatters and refinery workers combined their dreams and skills to embody the spirit of Houston, making it a city of opportunity. Pratt, the Cullen Professor of History and Business, is a leading historian of the petroleum industry.

The magazine opens with “The Faces of Texas Oil,” which features historic photographs from the collection of Story Sloan Gallery in Houston. Other features in this edition include:

The Spring 2011 issue closes with the second part of its series, “When There Were Wards.” This installment features “Third Ward, Steeped in Tradition of Self-reliance and Achievement” by Ezell Wilson; “Two Worlds a Mile Apart, A Brief History of the Fourth Ward” by Trilla Pando; and “Freedmen’s Town, Texas: A Lesson in the Failure of Historic Preservation” by Tomiko Meeks.

To get an annual subscription to Houston History for $15, please visit the magazine’s new website, www.houstonhistorymagazine.org, or call 713-743-3087. A limited number of copies will be available for purchase in mid-April at Brazos Bookstore,  2421 Bissonnet St., and River Oaks Bookstore, 3270 Westheimer @ River Oaks Blvd.

Volume 8, Number 2
Beauty in the Eye of the Beholder: Third Ward Art Treasure but a Memory