By Houston History Magazine on November 14, 2017 in Business and Industry, Energy and Environment

The refining industry in Texas, particularly in Houston, has played an important role in the city’s history and culture. Refineries emerged around the Houston Ship Channel following the discovery of oil in the region, providing jobs for people in the surrounding areas and those coming from out-of-state. Among thousands of employees in this industry is my father, Martin Bernal, who has worked at LyondellBasell Houston Refinery since 1989. During that time, he has seen the refinery grow and has experienced various ownership changes.

On July 18, 2008, my father could have been at the wrong place at the wrong time when one of the world’s largest cranes collapsed at the refinery. He could have been one of the dead or injured workers. I have always been conscious of this accident, but it was not until formally interviewing him about it and his role as part of the emergency response team that I realized the magnitude of this event. This accident differed from those usually associated with refineries, which are explosions due to the type of products produced there. A crane collapse and other similar accidents are just as important, however, because they jeopardize the safety of the workers and the reputation of the location. 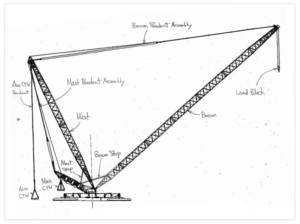 Drawing of the crane from OSHA’s subsequent investigation.

The Netherlands-based LyondellBasell Houston Refinery sits on 700 acres of land located on Lawndale Street in Houston, Texas, between Texas State Highway 225 and the Houston Ship Channel. The company notes this refinery was “one of the first petroleum refineries constructed on the Houston Ship Channel and traces its origin to 1918.” At its creation, Sinclair Refining operated the refinery, followed by Atlantic Richfield Company (ARCO). After 1993 the refinery was “part of a joint venture with CITGO Petroleum,” and remained so until 2006 “as Houston Refinery LP [but] is now a wholly owned subsidiary of LyondellBasell.” Although the refinery has changed names and ownership multiple times, it has continued to produce the same products.

For author Laura Bernal this incident hit close to home, in her YouTube video she gives more details about the tragic crane accident and its aftermath.

Interview with the then Vice President of LyondellBasell, Jim Roecker, following the accident on July 18, 2008. 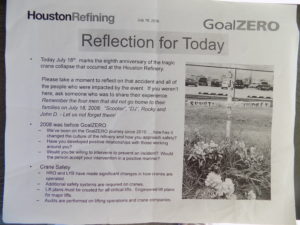 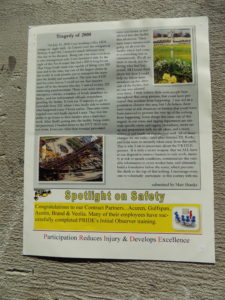 In the years following the crane collapse, LyondellBasell remembers the accident and promotes safety through their GoalZERO program. These are some flyers used to communicate that information to its workers.