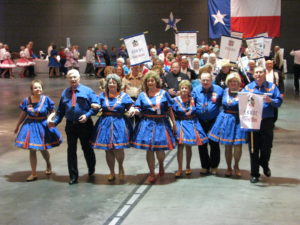 Many people do not realize that a cultural phenomenon has revolved around square dancing in Houston for almost seventy years. Square dance is a folk dance with four couples positioned in a square. Couples 1 and 3 are known as head couples, and couples 2 and 4 are known as side couples. A caller, who does not usually participate in the dance, cues the dancers to complete various movements or steps, which they have learned previously. The sequence of steps varies with the song or pattern being called. The music may be anything from pop to country to Broadway musical or even rock, adding to square dancing’s broad appeal.

Square dance has its roots in European folk dance, with various circle dances done across the United States. Modern or Western square dancing did not become popular until the 1940s. In the early forties a few clubs around Houston held dances with about three squares or twenty- four dancers. When soldiers returned from World War II, reunited couples wanted to engage in social activities together, and interest in dancing began to mount. In 1947, Dr. Carl Journell, a dentist, started teaching square dancing in Houston and had so many applicants that he had to limit the class size. One class had 140 couples.

At about the same time, the Houston Recreation Department began offering free square dancing classes in various city parks. After ten lessons a class graduated and formed a square dance club. Clubs grew like wildfire, and many had waiting lists. After six months, new dancers were considered experts, and they spread the dancing fever to their friends.

Click here for the PDF of the full article.