By Houston History Magazine on July 12, 2013 in Energy and Environment, Letter from the Editor, Preservation 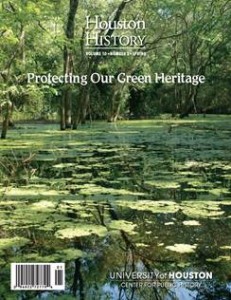 While doing research for my dissertation last century, I stumbled across a report on oil pollution of coastal waters in the United States published in 1923. I was surprised to see Houston, Galveston, and Port Arthur mentioned prominently among the most polluted waterways in the nation. Oil-led development on Sabine Lake near Port Arthur had been underway for about twenty years at the time; the Houston Ship Channel (HSC) had been opened for less than a decade.

According to the report, oil entered the region’s waters from every direction. Under appalling—but accepted–business practices, many tankers coming into Galveston harbor and the bay simply dumped oil-contaminated ballast out at sea, where it rode the waves onto the shore.  Bad equipment and sloppy procedures in the transshipment of oil from refineries to tankers put much more oil on the water. Indeed, one refinery in Port Arthur found it profitable to employ “crews of men and equipment for skimming the surface of the harbor waters” and returning oil to the refinery. But “they appear to be doing little more than holding their own.…” The regular operations of the growing refineries along the HSC left large amounts of crude oil on the ground, waiting for the region’s hard rains to wash it into the channel. There it joined oil-contaminated cooling water and used crank case oil dumped into the city’s bayous and sewers to make the HSC “one of the worst oil polluted localities in the nation.” Down the ship channel, Galveston’s beaches were a mess. Oil discarded from producing wells into nearby streams found its way down the Brazos River and out into the Gulf, where the current often took it up to Galveston to join the tourists. Hotels placed cans of gasoline on the beach so that their guests could clean up after swimming in the ocean.

Looking back at our history, these practices are hardly surprising. The region was booming, and there was little time to waste on strengthening local regulations, which one critic called “trifling matters to harass companies which had invested millions on plants along the waterway.” Around the nation, not just in Houston, pollution was still viewed as an “externality” separate from economic considerations. At the time, the federal government lacked effective powers to address the problem, and state and local agencies had limited resources and authority. Oil was, after all, the engine of growth in the region, and jobs trumped pollution control. Houston–the city of opportunity–was too busy to clean up.

In the ninety years since the 1923 report, much has changed. Strong environmental laws are in place at all levels of government; public attitudes toward pollution are dramatically different; industry has put in place cleaner operating procedures, at times to respond to new regulations and at times to limit waste. Yet in a region that grows and grows, pollution control remains a difficult issue. Our air and water continue to bear the burden of emissions from our giant refineries and petrochemical plants and our regional “mass transit system” of sprawling freeways packed with gasoline-powered vehicles-often carrying a single passenger. These drivers, more than refineries and tankers, have become the symbol of the Houston area’s race to balance economic growth with improved environmental quality. The race is still on, and slowly we are gaining ground. But we have a long way to go to make up for decades of environmental neglect as our city grew into the Oil and Gas Capital of the World—and its oil pollution capital as well.