By Houston History Magazine on March 14, 2014 in Military and War

150 years ago, an unlikely naval encounter off Galveston stunned the U.S. Navy and saved Texas from a Federal invasion.

Days after the Confederates opened fire on Fort Sumter in April 1861, President Lincoln declared a blockade of ports in the seceded states. The blockade represented a key part of the North’s “Anaconda” strategy, designed to isolate the Confederacy from trade and foreign assistance, slowly squeezing the life out of the rebellion. The Anaconda strategy was sound, but the Union remained woefully under-equipped to implement it. At the beginning of the conflict, the U.S. Navy possessed only a few dozen warships, and many of these were stationed overseas. To make up the deficiency, Navy department agents spread out through northern ports and shipyards, buying up every civilian vessel they could find – including some still under construction – that might be converted to a warship. 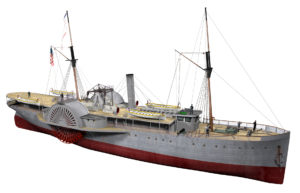 One of these new acquisitions was the iron-hulled passenger steamer St. Mary’s, purchased new from her builder for $110,000. Outfitted with a hurricane deck and wooden cabins, the 201-foot ship had a pair of enormous side wheels, driven by a single-cylinder steam engine that provided propulsion. A pivoted, diamond-shaped iron frame, known as a “walking beam,” that rocked back and forth as the wheels turned, like a leviathan child’s teeter-totter transferred the vertical motion of the engine to the side wheels. Commissioned in October 1861 as USS Hatteras, the steamer was soon outfitted with an assortment of obsolete smoothbore cannon and more modern, rifled guns. Hatteras’ armament typified that used by ships on the blockade but, as events later demonstrated, proved woefully inadequate against a purpose-built warship.

USS Texas: More Firsts than any U.S. Naval Ship
Letter from the Editor – Military Might