By Houston History Magazine on March 14, 2014 in Education, Military and War, Museums, Preservation 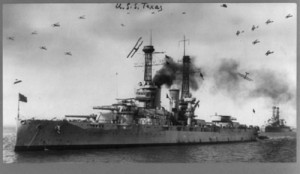 During the early twentieth century, Newport News Shipbuilding Company constructed the USS Texas (BB-35), which was commissioned on March 12, 1914. After surviving two world wars, this magnificent vessel became the last surviving dreadnaught battleship, representing an important piece of local and national history. The Texas measures 573 feet long with a 95-foot beam. Especially known for having some of the largest engines constructed for American battleships, she used steam turbines and triple expansion engines, which made the ship very fuel-efficient. This huge battleship, now a tourist attraction, can be found at the Battleship Texas State Historic Site near the south Houston Ship Channel and the San Jacinto Battleground State Park. 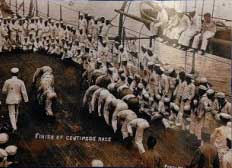 The deck of the USS Texas not only served as a battle front, but also offered men an escape from the stress of months at sea, as this centipede race on the ship’s deck illustrates.

The state of Texas adamantly insisted on bringing this incredible ship to Houston to preserve and protect her from government or scientific experiments, such as turning her into an artificial reef that would have ultimately destroyed her.   Despite being the only remaining battleship of its kind, sadly with time, Texas has begun to wear out. Repairs have become more expensive as Houston’s salty water corrodes the ship at an alarming rate, making it difficult to maintain her. As Texas celebrates the centennial of her commissioning, this article looks back on some of the major battles she survived and the notable number of firsts she accomplished for the U.S. Navy. 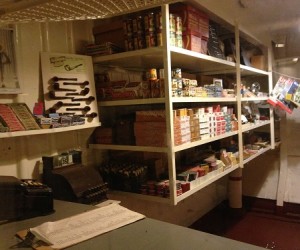 Follow these links to earlier articles from the magazine on the fate of the battleship.

Facing History, CREW: the Men of the USS Texas
by Marisa C. Sanchez

Restoring Texas History: The Last Battle of the USSTexas
by Abbie Salyers

The Future of Battleship Texas
by Donald H. Fischer

Leaving Texas High and Dry:
The Preservation of the Battleship Texas
by Abbie Salyers

Discovering Maritime Monuments from World War I
A Sharp Fight