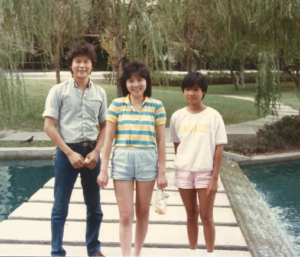 Suzanne Chew, center, with her brother Steve and neighbor Christine, in 1981 shortly after coming to Houston.

For many Vietnamese during the Vietnam War, an international refuge meant hope for survival. Other Asian ethnicities, including the Chinese, looked to the United States with optimism for a better future. Several Vietnamese and Chinese immigrants found their new home in Houston, raising first-generation, American-born children while trying to preserve a piece of their old society. Vietnam War refugees faced many taxing struggles, such as cultural assimilation, which included the difficult tasks of learning the English language and American customs and adapting to a new and developing Asian culture in the United States. Over twenty years after the fall of Saigon, Houston became only the second place in the United States, after Sacramento, California, to erect a memorial commemorating the Vietnam War. 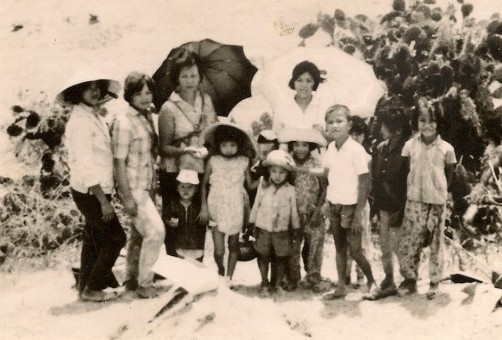 The Chew family gathers to pay respects to their ancestors at the cemetery in Vietnam, Easter, 1965.

For Vietnamese Houstonians, this memorial served as a cultural community core where they could gather and remember home. From the original, small Asiantown in the downtown area, the Chinese and Vietnamese communities today have expanded into the Bellaire area, which is generally bounded by Fondren, Beechnut, Westpark, and Highway 6. It acts as the main Vietnamese-Chinese center for Asian Americans, where grocery stores, restaurants, and cultural events offer up a bittersweet taste of home.

Click here or on image below to watch a video produced by author Jessica Chew.

The Pinoys of Bayou City
Korean Americans in Houston