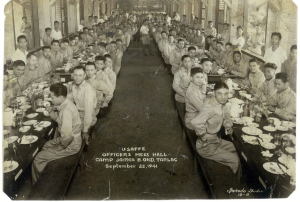 Filipino officers of the U.S. Armed Forces in teh Far East in a mess hall months before most of them were killed captured by invading Japanese forces at the Start of World War II. Photo courtesy of Christy Panis Poisot.

The history of Filipinos in the southern United States stretches back to the mid-eighteenth century, when burgeoning trade routes between the two lands encouraged small numbers of Filipino migrants to settle in some of their first enclaves in the Americas. In 1763, Filipino fishermen established the small communities of St. Malo and Manila Village in present-day Louisiana near the Mississippi River delta. In the deep recesses of the Louisiana swamp, residents recreated small parcels of the Philippines on American soil. 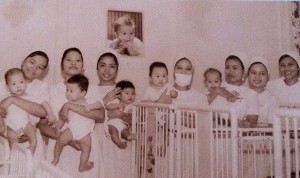 A group of mid-twentieth century Filipino nurses training in the Philippines. Thousands of nurses trained for positions around the world, with many working at the Texas Medical Center and other Houston medical facilities.

Visitors to these villages might have been quite surprised to find authentic Southeast Asian stilt fishing houses. Although these isolated yet unified outposts survived for more than a hundred years,  only the ruins of the settlements’ buildings remain today after devastating hurricanes. Nevertheless, these tiny fishing villages live on in memory as progenitors of the modern Filipino American community. While substantial numbers of Filipinos did not immigrate to the region again until the 1960s, these pioneers set the template for the success of Filipino life in the United States.

From Gujarat to Houston
Vietnamese and Chinese American Cultures