By Houston History Magazine on March 30, 2016 in Archives, Military and War, University of Houston 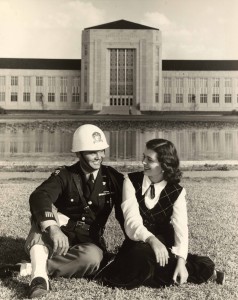 The sound of hands clasping the wooden stocks of 1903 Springfield rifles echoed loudly across the field as a crowd of Houston Cougars football fans watched. Thirty young men, all dressed in their pink and green military dress uniforms, were executing the Queen Anne’s Drill—a complex rifle maneuver that required high levels of discipline and precision to perform it correctly. At the end of the drill, each man planted his rifle butt-first into the field and the crowd erupted into applause. The stadium lights shined down on each individual’s bowed head, glistening off their chrome-plated helmets. These men are hallowed members of the famed Cullen Rifles, a once time-honored tradition at the University of Houston.

For such a highly decorated tradition at the university, the history of the Cullen Rifles is very poorly documented. Deep within the M. D. Anderson Library archives, only decades-old pictures from past college yearbooks remain to chronicle the group’s history. What can be gathered, however, is that the Rifles were a modern day praetorian guard and once served as color guards to the President of the United States, all the while remaining undefeated as a competitive drill team throughout the southwestern United States, representing discipline, precision, and honor for the Houston Corps of Cadets, the university’s Army ROTC program.

The 1955 Cullen Rifles, led by Cadet First Lieutenant William “Bill” Taylor, stand in formation on the steps of the Ezekiel Cullen Building, a favorite place for members of the Rifles to have photos taken for the Houstonian yearbook.

The University of Houston’s Creative Writing Program, 1979-1989
A Quest into the World of Rennies