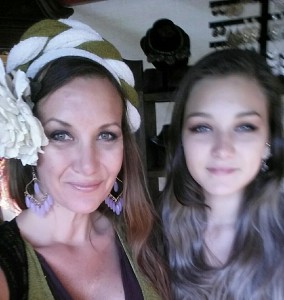 Several multi-generation families of Rennies, such as this mother and daughter, live in the community.

The Texas Renaissance Festival has been a popular form of entertainment for Houstonians since the early 1970s, with thousands making the trek each fall into a world that is part history and part fantasy. Upon entering the fairgrounds, tourists and visitors encounter performers, merchants, and artisans donning medieval-style garb and speaking in a language that most have only heard in Shakespearian plays. Contrary to what some may assume, many of these Renaissance players are not your run-of-the-mill citizens, only working the fair every October and November, but a people who belong to a subculture consisting of actors and artisans that share a common love for the arts and a way of life that allows them to explore their passions year-round. Working fair after fair, throughout the state of Texas and United States, these people endearingly refer to themselves as Rennies.

The first Renaissance festival was held on the weekend of May 10, 1963, in southern California. As the years passed, the festival’s popularity grew and its duration was extended to six weekends, eventually developing into the current California Pleasure Faire, which is divided into a northern and southern festival. This became the prototype for Renaissance festivals found in the United States today. The event’s remote site captivated visitors who were absorbed into the fair’s historic realm, however, the concept of an interactive audience had not yet come into play. Rather, the fair aimed to compel audience members to imagine what it must have been like to live during the Middle Ages.