By Houston History Magazine on July 30, 2016 in Archives, Business and Industry, Food, Restaurant 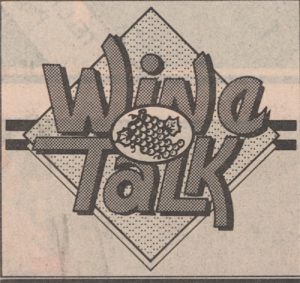 George Fuermann, a columnist for the Houston Post, is perhaps best remembered as the man who helped bring fine wine appreciation to Houston. In his weekly column Wine Talk, which ran from 1984 to 1995, Fuermann educated Houstonians about wine history, traditions, and industry trends. A regular topic featured in the column, and one about which he felt particularly passionate, was the Texas wine industry. A big proponent and defender of Texas wine, Fuermann provided a unique insight into the early years of winemaking in Texas. By telling the stories of Texas winemakers, he brought Houstonians’ attention to this upstart industry, helping to fuel its growth.

At the time his column appeared, the Texas wine industry was comparatively young, with Fuermann dating the state’s modern era of professional winemaking to 1975. Unlike the other more famous and better-regarded wine-producing regions in the United States, Texas has only one historic winery, Val Verde Winery at Del Rio, founded in 1883. In 1975, it remained the only bonded winery in the state, and vineyard acreage remained low, at only twenty-five acres. A year later, however, Texas saw its first new winery since Prohibition established, Llano Estacado Winery located in the High Plains region.

Click here to read the PDF of the full article. 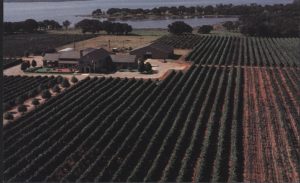 Click here for more information on the Hospitality Industry Archives, Massad Research Center in the Conrad N. Hilton College of Hotel and Restaurant Managment at the University of Houston, which houses the collection related to George Fuermann’s “Wine Talk” as well as numerous other collections related to the industry locally and around the world.

Susan and Ed Auler started Fall Creek Vinyards in 1975 after returning from a trip to France. As Ed explained to Fuermann, “I looked up at Clos de Vougeot [in Burgundy], and thought: We have limestone and sandy loam near a body of water on our ranch. Why can’t we do that?” Their first crush was in 1979, when they produced 350 cases of three wines, two from French- American hybrid vines. In 1982 they removed the hybrid vines and planted vitis vinifera instead. Sixteen years after they got their start, their initial half-acre vineyard had grown to sixty-five acres, and they had produced ten vintages.

One of the oldest wineries in the state, Pheasant Ridge garnered national attention when it won a gold medal at the San Francisco Fair and Exposition’s National Wine Competition for its 1983 Cabernet Sauvignon.

Llano Estacado goes back to the mid-1950s, when Robert Reed, a horticulture professor at Texas Tech University, planted discarded vine cuttings in his backyard. In 1973 together with his colleague Clinton McPherson, he established a wine lab at the university. Two years later they started Llano Estacado with a group of investors. In 1977 the winery produced 600 cases of its first vintage. By 1983 Llano Estacado’s production was at 14,000 cases and at the beginning of the 1990s production had increased almost five fold, with 68,000 cases released to the market.

In 1984 Messina Hof Winery became the third Texas winery to win an important award when it received a gold medal for its 1986 Chenin Blanc at the Atlanta International Wine Festival. This was one of only forty-five golds awarded to U.S. wineries, and more impressively, one of only ninety-six gold medals awarded to the 1,806 wineries that entered internationally.