By Houston History Magazine on July 12, 2011 in Race & Ethnicity, Religion 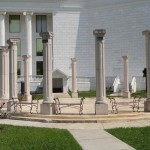 Travelling along Texas Highway 59 in northeast Houston, it is hard to dismiss the golden dome that towers above the landscape. Part of a larger Greco-Roman inspired structure, the dome stands in sharp contrast to the surrounding neighborhood. With a large number of vehicles passing by the building each day, only a small number of commuters and even fewer travelers know the purpose of the opulent marble edifice. The stark white construction, surrounded by a painted metal fence, looks more like a monument to an eccentric millionaire than a church, but it is one of the many houses of worship that can be found around the city. The denomination that meets here is not Baptist, Catholic, or even Greek Orthodox; rather a form of Pentecostalism that caters to a primarily Latin American congregation calls the church home. The church, known as Iglesia de La Luz del Mundo (Light of the World Church), represents the central Houston congregation of the Mexico-based denomination of the same name.

Eusebio Joaquín González established the organization, formally known as La Iglesia del Dios Vivo, Columna y Apoyo de la Verdad, La Luz del Mundo (The Church of the Living God, Column and Foundation of Truth, The Light of the World), in Monterey, Mexico, on April 6, 1926. Called into the service of God through a vision, González changed his name to Aaron and began his service as a minister. Known as the Prophet Aaron to congregants, González spread Oneness Pentecostalism across Mexico. The Oneness wing of Pentecostalism rejects the eternal divinity of Jesus, instead believing that it was his baptism that made him the Christ and therefore divine. La Luz del Mundo ministers, in the tradition of Oneness beliefs, baptize solely in the name of Jesus Christ instead of the Trinity: God the Father, the Son, and the Holy Spirit.  In the 1950s, González established the Hermosa Provincia, or Beautiful Province, in Guadalajara, Jalisco, Mexico, which remains the headquarters for La Luz del Mundo.

González held the positions of both “Apostle” and “international President of the Luz del Mundo church” until his death in 1964. During his tenure, the Prophet Aaron oversaw the expansion of the church throughout Latin America and the world. Oddly, Aaron opted to move north into the United States with his missionary work before continuing south into Central America. Because of a Pentecostal awakening in both the United States and Latin America, the denomination grew rapidly. With over one million members in Mexico, La Luz del Mundo is currently the second largest denomination in the country, eclipsed only by the Catholic Church.

Click here to view complete pdf of the article.