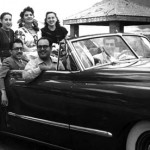 Lydia Mendoza was born in Houston Heights on May 21, 1916, to parents who had fled the Mexican Revolution. Rising to fame in the 1930s in the Southwest United States, Mendoza became known as the Queen of Tejano and the first icon of Mexican American pop culture. Despite her popularity at the time, discrimination against Mexicans remained strong. Many motels and restaurants posted signs warning “no dogs or Mexicans allowed.” The Mendoza family overcame these challenges often staying in Catholic churches and taking their own cooking equipment on the road with them. Despite the challenges she faced, Lydia gained widespread fame, earning the nicknames La Alondra de la Frontera (the Meadowlark of the Border) and La Cancionera de los Pobres (the Songstress of the Poor). “For older Mexicanos,” one scholar claims, Lydia Mendoza brings back “vivid memories of a musical artist and of their own youth, of the struggle to grow up Mexican in the United States, of having to fight just to be served a cup of coffee in a downtown Texas café.”

Like other Mexicanos during the early 1900s in the lower Rio Grande Valley, Lydia’s parents felt comfortable in the borderlands. Many settlements were originally Mexican, and many people in the region spoke Spanish. Lydia’s father, Francisco, worked as a mechanic on both sides of the border and took his family with him. Often taking extreme measures to cross the border, Francisco is said to have impersonated a woman, a priest, and even Capitán José David Contreras Torres in Pancho Villa’s army to get back and forth.  Thus, the Mendoza children—Beatriz, Lydia, Francisca (Panchita), María, Juanita, Manuel, and Andrés—were born at the end points of travel in either Monterrey or Houston.

The Chicano Movement in Houston and Texas: A Personal Memory
The “Mother Church” of Mexican Catholicism in Houston