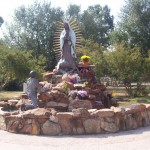 On August 18, 1912, a priest celebrated the first mass at Our Lady of Guadalupe Catholic Church in Houston’s Second Ward on the second floor of a two-story wood-frame structure located on the corner of what was then Marsh and Runnels Street. Three weeks later, on September 8, 1912, the school at Our Lady of Guadalupe opened on the first floor of the same building. These events marked the beginning of the Catholic Church’s mission to the Spanish-speaking community of Houston. Bishop Nicholas Gallagher of the Galveston diocese entrusted the Oblates of Mary Immaculate with the task of ministering to the Mexican and Mexican American community in Houston because priests from this order were “known to have the spirit and the tradition of working in the most difficult missions.” Upon their arrival in 1911, the Oblates first settled in the Magnolia Park neighborhood where they formed a church named Immaculate Conception. This Church served as the home base for the Oblates, but was not a Mexican national church.

Ethnic Mexicans who chose to attend mass at Immaculate Conception faced the same discrimination confronted at every other Anglo Catholic Church in the city at the time. Mexicans were either forced to sit in the back pews of the church or refused entry with signs warning, “Mexicans prohibited.” Parishioner of Our Lady of Guadalupe, Carmen Ramirez was one of eight children who grew up in the Sixth Ward on Sawyer Street near St. Joseph’s Catholic Church.  Her family walked to Our Lady of Guadalupe every Sunday because as she recalled,

In the past San Jose [St. Joseph’s] didn’t welcome Mexicans … me and the other girls from the neighborhood would go to church [during the week] and they would ask, ‘Why don’t you go to your church?’, a Mexican church …We sat in the very back along with a black gentleman … And one time, my mother wanted to put my brother in school [at St. Joseph’s] but they didn’t allow Mexicans in the school either. The nun closed the door on my mom …They didn’t want Mexicans in the school, nor did they want us at mass. And look now, it’s very different, isn’t it?

The institutional Church responded to this segregation by setting up Mexican national churches “so as not to offend Anglos accustomed to separation of the races.” For this reason, as the Oblate priests organized the church and school at Immaculate Conception, four miles away in the Second Ward they were simultaneously establishing the church and school of Our Lady of Guadalupe to serve the ethnic Mexican population.