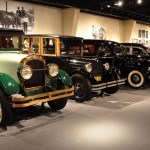 Robert L. Waltrip founded the National Museum of Funeral History in 1992 in order to “educate the public and preserve the heritage of death care.”  Waltrip’s family founded the Heights Funeral Home in Houston, Texas, and Waltrip became director upon his father’s untimely death. He expanded the business, Service Corporation International, into what is today the largest funeral service corporation in the country.  Having witnessed the variety of traditions, customs, and rituals that accompany funerals and the funeral industry, Waltrip felt it was important to open a museum to showcase how they have evolved over time.

On September 20, 2008, Genevieve Keeney, the director of the National Museum of Funeral History, sat down with Anna Burke Herrera to discuss the history of Houston’s funeral museum.

AB:      What are some of the more popular exhibits that you have in the museum?

GK:     “The Tomb of the Unknown Soldier” … We have a TV that displays the changing of the guard, which is a very ceremonial period that happens throughout the day there. It is very structured and disciplined and touching. … Another popular one is the “Presidential Museum,” [which] displays all the different presidents throughout time starting with Washington. Of course we don’t have [artifacts for] all of them, but we do have the memorial folders or the newspaper articles or some of the actual artifacts from that president’s funeral. We do have some of the artifacts from some of the most recent presidents, and we are expanding that now, so that we can make room for Gerald R. Ford and for our future presidents, President Clinton and the Bushs. Another one is “Funerals of Famous.” … We do have Princess Grace of Monaco’s hearse. That was put on loan to us. Then we have different memorial cards and folders that are handed out at the ceremonies of the different funerals of the famous.