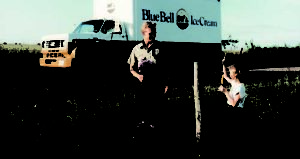 104 years, eight managers, and one family turned a down-home creamery in Brenham, Texas, into one of the most respected companies in the region and the country.  The name Blue Bell has become synonymous with ice cream, and the little creamery in Brenham now sets the gold standard for ice cream production while retaining the down-home feel that first made the creamery popular among folks in Central Texas. From the original hand crank freezer to the state-of-the-art facilities today, Blue Bell incorporates the same personal service and care that it did when it started as the Brenham Creamery Company in 1907.

A group of Brenham businessmen established the Brenham Creamery Company as a cooperative to produce sour cream butter and named H. C. Hodde as its manager the following year. Hodde also wanted to make use of the sweet cream and, in 1911, decided to experiment with producing ice cream. Blue Bell Ice Cream: A Century at the Little Creamery in Brenham, Texas 1907-2007 indicates, the “butter maker at the company laboriously hand-cranked a mixture of cream, sugar, and flavorings in a metal can surrounded by cracked ice and salt set inside a wooden tub.” This process produced two gallons of ice cream delivered by horse and buggy to Brenham families who could consume it before it melted. The enthusiastic response led the directors to approve purchasing equipment that enabled them to produce 6,000 gallons of ice cream the following fiscal year.

Sonny Look: A Humble Showman
8-F and Many More: Business and Civic Leadership in Houston