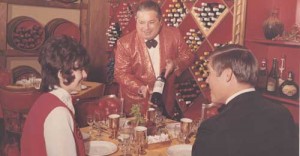 I will never forget the first time I saw Sonny Look. My family went to Look’s Sir-Loin House to celebrate a special occasion in 1960, a time before eating out was common or Houston had become a national restaurant capitol.  Not long after the hostess seated us, a man approached our table, a larger-than-life kind of guy wearing a red brocade jacket.  He was incredibly friendly and spoke to all of us—even me, a eight-year-old—as if we were the most important customers who ever walked in the door. I loved the four different flavors of butter, especially the honey butter. My parents raved about the steaks, and my dad appreciated the complimentary glass of wine Look offered to the adults. Since Texas law still prohibited liquor by the drink except in private clubs, that free glass of wine had tremendous appeal!

Look won us over on that first visit, and we celebrated many special occasions and just ordinary days athis restaurants over the years because you could always depend on a first-class experience. Little did I know then what the future held. Twenty years later, my husband, Tom Harwell, went to work for Sonny at Sunbelt Hotels, and he and his wife, Carole, became our dear friends. Recently Carole sat down with me to share memories of this Houston hospitality legend.

Garret Dawson “Sonny” Look was born on April 21, 1919, in Caldwell, Texas, the oldest of four children.  He attended Brenham High School and at age fourteen took a job at the New York Café on Main Street in Brenham, just off the town square. He held every position from busboy to manager, and at age twenty-one, bought the café from the owner.  Uncommon for a small town, the menu included Alaskan salmon, oysters, flounder, veal, seven different cuts of beef, and a wide array of appetizers and sides.

Sonny married Mary Reynolds of Brenham and, in 1942, enlisted in the Navy as a ship’s cook 1st class. He sold the café to the owner of a cab company with a “gentleman’s agreement” that Look could buy it back when he returned.  He served on the USS Beagle in the Pacific until 1945. When he came back to Brenham, the owner refused to sell, so Sonny packed up Mary and their son Gary, who was born in 1944, and moved to Houston, which offered greater opportunities.

Food for the Body, Food for the Spirit: Irma Galvan and her Award-winning Mexican Restaurant, Irma’s
Blue Bell: The Cream Rises to the Top