By Chancellor and President Renu Khator

When I was first contacted about the presidency of the University of Houston, back in 2007, I immediately started searching online to learn about the university, the city that shares its name, and the great state they both call home.

I knew of the Alamo, of course, and the fact that Texas had been an independent republic, and that two recent U.S. presidents had lived in Houston – one of them to this day.  I also 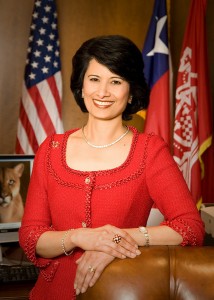 knew of NASA and the Johnson Space Center.  After all, who can forget that “Houston” was the first word uttered by a human from another celestial body?  I knew that Houston was famous for its spirit of entrepreneurship.  And I remembered the skyscrapers and urban sprawl I saw when I visited the city more than ten years ago for a wedding.

But what I found online intrigued and amazed me.  It also started me thinking that, after 22 years at the University of South Florida, and after occasional calls from headhunters on behalf of prestigious universities across the country – overtures that I rejected – Houston was where I wanted to write the next chapter of my career.

I found that Houston is an international city of the first order, with 94 consular offices and 22% of its populations foreign-born.  I found that Houston is third in the nation in number of “Fortune 500” companies located within its metropolitan area.  And I found that, remarkably, if Houston were an independent nation, it would be the world’s 30th largest economy based on its annual gross product of more than $400 billion.

To read the full article click here for the PDF.