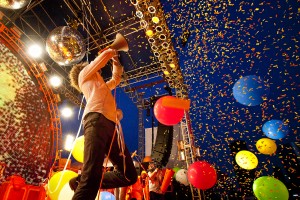 Omar Afra, the co-founder of Free Press Summer Festival, was born in Beirut, Lebanon, but has lived in Houston since the age of two. He attended Askew Elementary, Paul Revere Middle School, and Lee High School. Afra went on to a slew of community colleges, the University of Arizona, and the University of Houston to study journalism and political science. In 2003, he started Free Press Houston. Free Press TV started in 2009. Afra explains that, “the motive was originally to do the silly stuff we hatched in our heads. There was no financial or journalistic motive. Since then, we’ve managed to include serious content while continuing to interweave the silly stuff but it’s still a work in progress.” Free Press Summer Festival (FPSF), sponsored by Free Press Houston and Pegstar.net, began in 2009 and brings both local and national artists to Houston’s Eleanor Tinsley Park each year. The following information came from a conversation between Omar Afra and Aimee L. Bachari on September 18, 2013.