By Houston History Magazine on March 14, 2014 in Houstonians, Military and War 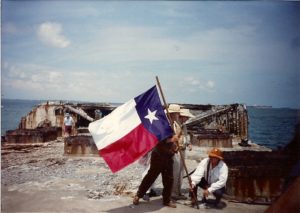 Two historically important seafaring monuments dating back to World War I (1914-1919) can be found in the Greater Houston area. The grander of the two is the Battleship Texas BB-35, saved from the scrap yard by donations from the people of Texas, and brought here for retirement. Few people realize, however, another World War I monument rests in Galveston Bay.

As the Bolivar Peninsula ferry clears the Galveston landing slips, she gains headway, surging through the wavelets. On the port side passengers can see the mass of Pelican Island, with Seawolf Park and the pavilion. Rounding the tip of the island, the ferry sets her course across the busy ship channel towards Bolivar.

Now, as passengers gaze to their left, they are astonished to see the weather-beaten hulk of a full-size ship, standing motionless in the murky water. When the ferry passes closer, people on the port side stare in wonder. Long ago abandoned, bleached by sun and sea and countless storms, this mystery ship rises above the waves like a Texas Sphinx. 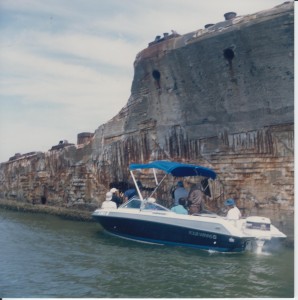 The onlookers have discovered a ‘Texas Treasure” – the good ship SS Selma. Not just any ship – a concrete ship. A proud veteran of the U.S. Navy, with wartime service in World War I. Just like other ninety-five-year-old veterans, the SS Selma (though reluctant to do so) could tell some exciting tales. Tales of dangerous voyages to hazardous ports, of riding out storms and hurricanes, of brief fame as a movie star, of unsung service during a terrible local disaster, of a midnight visit by a barge loaded with contraband treasure . . . and of a “Hollywood ending” with cheering audiences and enduring recognition!