By Debbie Harwell on October 31, 2014 in Business and Industry, Energy and Environment, Houstonians, Women 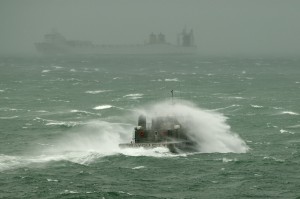 For those who think it is nothing but sunshine and calm seas on the Gulf Coast: “The First Norther of the Year” taken on October 22, 2007, shows the pilot boat Bayou City just outside the Galveston jetties in the pilot boarding area. Photo courtesy of Captain Lou Vest

Every day, Houstonians drive over the bridges above the Houston Ship Channel, glancing occasionally to see the ships and their cargos, and then turn back to focus on traffic without giving much thought to how those ships got there. Each year, more than 20,000 ships and 230,000 barges carrying some 240 million tons of cargo negotiate the 56-mile long, 535-foot-wide channel to produce an estimated million Texas jobs and $56.5 billion in personal income and consumption expenditures.

But what would happen to Houston if those ships could not reach the docks? Or if ship captains attempted to navigate the winding, narrow waterway lined with petrochemical plants without knowing the water’s depth and currents, the shoals, the tides, the clearance under the bridges, or how to maneuver around passing vessels?

Houston is often called the city that built the port that built the city. The measure of success, however, should not be in the building of what has become the nation’s largest inland port but rather in the hundreds of thousands of ships the Houston Pilots have quietly and safely guided along the channel over ten decades. Steve Huttman who manages a fleet of harbor tugs along the Gulf Coast notes, “In order to bring a vessel into port, you have to have that pilot with their unique experience to bring the vessel in, with [its] handling characteristics, understanding the channel . . . The pilot’s the conductor, telling our tug master where to go and where to get ready, and what the plan of attack’s going to be.” 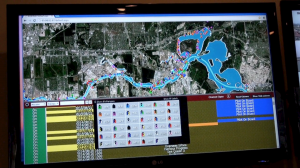 The dispatch screen at the Houston Pilots office provides many different types of information for vessels in transit, at the docks, and waiting off the coast. Data includes types of vessels, cargo, size, and if a pilot is on board. This view shows the winding channel as it makes its way inland.

Pilotage is one of the world’s oldest professions and can be traced back to earliest vessels that crossed bodies of water for exploration, trade, and conquest. Houston Pilot Captain Holly Cooper explains, “A pilot’s job is local knowledge, to safely bring vessels in and out of harbor.” While that mission remains unchanged, the complexity of the job and who can become a pilot has changed dramatically.

For this article the authors had the opportunity to interview Houston Pilot Captain Holly Cooper. Click on the image to watch the first film clip in which Captain Cooper talks about the scenario of taking a ship out to sea.

Click on the image at right to watch the second interview clip in which Capt. Cooper discusses the challenges women faced in the profession when she joined twenty years ago. Each pilot is assigned a number when they are voted into the organization and she is Unit 151, or the 151st pilot since the group formed in 1921. To date, there are 220 Houston Pilots.

Go behind the scenes with this video, “It’s all in a Day’s Work for Houston Pilots!” from Henry de La Garza. Click the photo to the right to watch this video!

Watch the Houston Pilots board and guide the MSC Texas, the largest container ship to ever call on the Port of Houston, in this video. Click the photo to the left to watch this video!