By James Thornock on March 30, 2016 in Business and Industry, Communities, Education, Energy and Environment, Houstonians, Military and War 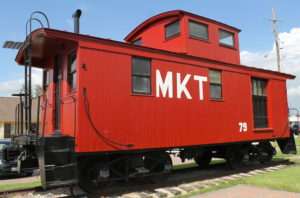 Long before the Katy Mills mall bustled with customers, the Katy rice mills watched over the area. Earlier still, the Missouri-Kansas-Texas (MKT) railroad traversed the fertile prairie near Cane Island Creek. The first records of the community are about Cane Island, named for the creek. Those who settled there received land grants from Stephen F. Austin, including James J. Crawford whose land included a part of the prairie west of Houston that was later named Katy and incorporated in 1945.

By 1847 the San Felipe Road connected Houston and San Antonio, running through Cane Island, which had become  a stagecoach stop. Remaining mostly undeveloped, Cane Island drew few settlers to the area, and many of those were freed slaves. That all changed, however, with the arrival of the railroad. In 1890, the MKT railroad announced plans to build rails through Cane Island and started the project three years later. In 1900, after several years of construction, trains started coming through the area.

With the railroad construction underway, ambitious men planned the city layout. In 1893, Milton August Beckendorff and his partners began surveying the land and determining county lines. They set a marker at the place where Waller, Fort Bend, and Harris Counties met. James Oliver Thomas along with the Cash and Luckel Company platted the town in 1895. Soon after, he applied for a post office, which was approved, and Katy was founded on January 23, 1896. Once the railroad began service, Thomas constructed another building downtown that became the post office and the location of social services for many years to come.

View all posts by James Thornock →

A Quest into the World of Rennies
First Providence Then Prosperity