By Aman Washington with Justin Thompson 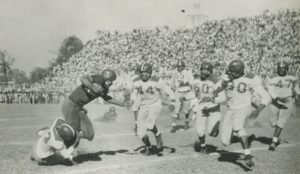 Wheatley in White with Purple, Yates in Crimson and Gold. The Thanksgiving day Rivalry filled Jeppesen stadium as the main event of the Third and Fifth Wards.

The annual Thanksgiving Turkey Day Classic football game is one of America’s most interesting stories of community building and agency, but few people today know about it. At one time the talk of Houston, the annual football game between rivals Jack Yates High School of the Third Ward and Phillis Wheatley High School of the Fifth Ward has a rich history that stems from the growth of predominantly Black neighborhoods during the late 19th and 20th centuries.

Segregation limited the ways Black and Whites could interact, including in sports. Consequently, Black schools established the Texas Interscholastic League for Colored Schools, later the Prairie View Interscholastic League, in the 1920s, which provided a format for the schools to play one another. Phillis Wheatley and Booker T. Washington played the first Turkey Day Game in 1927, and for a few years the three Black Houston high schools had set games on selected holidays. Yates and Wheatley played on Armistice Day, Wheatley and Washington on Thanksgiving Day, then Washington and Yates on Christmas Day. 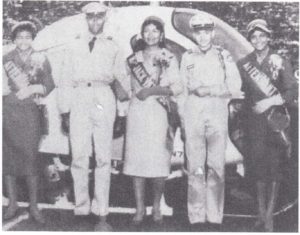 One of the most notable halftime showings occurred in 1958, when Carolyn Wilkins-Greene landed in a helicopter during Yates’ crowning ceremony.

This trend continued until 1940 when the league created districts and a playoff system to determine a state champion, effectively eliminating the Washington versus Yates Christmas Day game. Starting at that time, the Thanksgiving Day game alternated between Yates, Washington, and Wheatley. Dr. Thurman Robins attributes the three schools’ play style to the game’s transcendent popularity, stating, “[The] teams employed a wide open offensive style of play with backs spinning, a wide variety of end runs and laterals, reverses, use of the forward pass.” Although many people attended the Thanksgiving game, nothing compared to the crowds who came out to watch the Yates and Wheatley match up.

Click here to view a PDF of the full article

Below are excerpts from interviews with alumni of both Yates and Wheatley sharing memories about the game, their schools, and their neighborhoods:

According to Ralph Buggs (Wheatley Class of 1959) the game wasn’t just between the schools, it was between the neighborhoods.

Betty Taylor-Thompson confirms that the quality of their education at Wheatley is unmatched, despite the lack of equipment and resources.

Thurman Robins, Yates Class of 1958, discusses seating segregation and the growing attendance of the game.

View all posts by Justin Thompson →