By Houston History Magazine on May 5, 2017 in Communities, Education, Politics, Race & Ethnicity 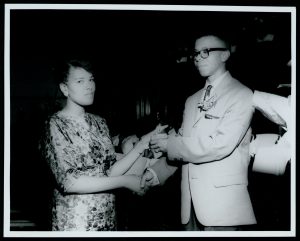 In the late 1950s and early 1960s young people in Oklahoma, North Carolina, and Tennessee held sit-ins that caught the eye of Texas Southern University (TSU) students in Houston. A growing disconnect existed between the younger generation and their elders on how to assert their rights as citizens. Those in Houston who remembered the horrific events in 1917 when violence erupted between white residents and African American soldiers guarding Camp Logan had no desire to see that repeated. Parents and grandparents told their children to wait, mind their own business, and focus on their education. The students chose to employ methods of peaceful protest preached by Dr. Martin Luther King Jr. Eldrewey Stearns was twenty-eight years old when Houston’s student civil rights movement began.

Born and raised in Galveston, Stearns served in the U.S. Army and graduated from Michigan State University (MSU) in 1957 before attending law school at TSU. In 1959 Stearns was pulled over in an upper-class white neighborhood late one night after dropping off his boss from the Doctor’s Club. Stearns had a defective light on his car and was asked to step out of the vehicle during the stop. He recounts, “I told them I had constitutional rights, and I was a law student.” He expected to get a ticket and leave, but the officers noticed a picture of a white girl, a friend of Stearns’s from MSU, in his wallet and told him, “You’re in the South and you don’t have a white girl’s picture in your wallet.”

Below, watch a film by author Michael Anderson created for the Houston History Class.

Interested in learning more? Here is a link to the finding aid for the Thomas R. Cole Desegregation Papers. Also, you can view the Foley’s Department Store Records here.

For more information on the documentary film Strange Demise of Jim Crow, or to purchase it, click here.

TSU issued a statement following the death of Holly Hogrobrooks and details her accomplishments.

The Houston Chronicle also published an article and photo set about Holly.