Mujeres Unidas, Taking the Initiative: The First Decade of Hispanic Women in Leadership 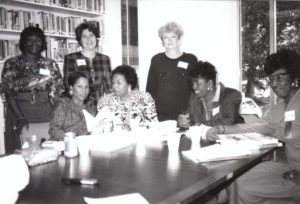 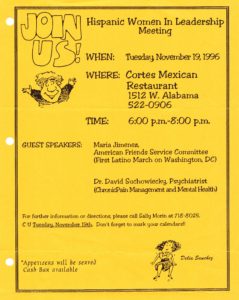 As a true grassroots effort from its founding, the Steering Committee members of the Hispanic Women’s Leadership Conference Committee recognized in the invitation to their first gathering that, “Success can be achieved only if women such as yourself become active participants” in realizing the vision. Less than a year later, with over

one hundred $10-dues-paying members and even more women—and men—in attendance, HWLCC held their second annual conference, “The Hispanic Woman – Yesterday, Today and Tomorrow,” featuring noted keynote speakers psychiatrist Dr. Ninfa Cavazos and educator Dr. Guadalupe Quintanilla. The conference’s two keynote speakers exemplified what was to become the core purpose of the organization: to further the health and well-being while also promoting the education and advancement of Hispanic women everywhere.

Today, the annual conference remains the primary activity of Hispanic Women in Leadership’s efforts. However, the organization’s deeper purpose, as can be discovered in its historical archives, has had a more acute and meaningful impact on its community. The conference itself was the vehicle for creating networks,- connecting community members with career-oriented Hispanic women role models, encouraging training and skills development, and promoting the appreciation for Hispanic culture and heritage. 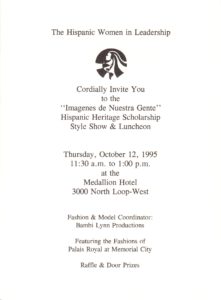 HWIL members used flyers, such as this one, to promote their events within the community. One of the most important events for this organization was the Hispanic Heritage Scholarship Style Show & Luncheon. During this event, HWIL raised funds for scholarships.