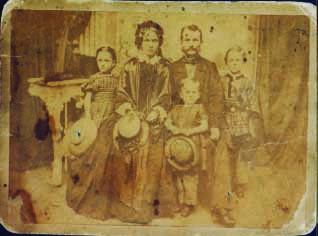 Why is it that the wards still persist in our collective consciousness? In the beginning, simple arbitrary boundary lines divided the wards. These sometimes split neighborhoods in half and lacked the finesse of modern day city council districts that have been redrawn and manipulated countless times to reflect socioeconomic, racial, and political concentrations. Second Ward was located east of Main Street, north of Congress Avenue, and south of Buffalo Bayou and extended to the eastern city limit. By 1900, the eastern limit of the Second Ward stood at a point roughly one and one half miles east from the city center, or to the approximate location of modern day York Street. The area was home to the extremely wealthy and extremely poor, bartenders and brewers, renters and ranchers, priests and politicos. The residents lived in a variety of situations ranging from traditional neighborhoods to suburban ranches. The area boasted one of Houston’s first churches, several early park and recreational areas, and the city’s first suburb.

One of the areas earliest neighborhoods was Frost Town, located in a dramatic bend of Buffalo Bayou about one half of a mile northeast of Main Street. Samuel Frost, fresh from service in the Texas Revolution in 1836, originally purchased the fifteen-acre site from the Allen brothers for $1,500. Frost set up a homestead and blacksmith shop on his land, but died shortly after of cholera. His brother Jonathan Frost purchased the land from the estate and subdivided it into ninety-six residential lots that became Houston’s first suburb.

Much of the early land ownership in the neighborhood appears to have been speculative. An estimated seventy percent of the Frost Town lots had been sold by 1840, but only twenty-five buildings are shown on the 1869 W. E. Wood map. Some of the early property owners of Frost Town lots included Michael DeChaumes, a French-born architect responsible for one of the early Harris County courthouses; Martin Floeck, a brewer; and William Settegast, a wealthy real estate investor who built a large house on Gabel Street. 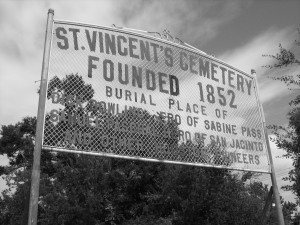 St. Vincent’s Cemetary is the final resting place for many of the SEcond Ward’s early prominent residents. Photo by Thomas McWhorter.

Quality Hill, another early neighborhood that stood in the Harris County Courthouse area, appears to have straddled Second and Third Wards and became home to some of Houston’s wealthiest residents. According to the 1860 Harris County census, thirteen heads of household lived in Quality Hill with an estimated personal wealth of more than $10,000. This figure starkly contrasts with the average Second Ward resident, who reported a total net worth of less than two hundred dollars at that time.

The KKK in Houston and Harris County, 1920-1925
Houston’s First Ward: Producing Food from Farm to Counter