By Houston History Magazine on December 20, 2010 in Politics, Race & Ethnicity

The following essay is an excerpt from an article of the same name that appeared in the Houston Review Vol. X, No. 1, 1988. It is reprinted with the author’s permission. 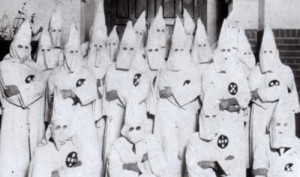 This pictured appeared in the 1922 Rice Institute yearbook. The author found no mention of Klan presence in the Student Association minutes for 1921-1922, although mention of it was found in the humor section of the same volume spoofing “Colonel Mayfield’s Weekly.” Photo courtesy of Houston Metropolitan Research Center, Houston Public Library.

On the evening of November 27, 1920, some two hundred mysterious figures threaded their way behind a torch bearer through the downtown streets of Houston. A hush fell over thousands of onlookers as the hooded figures silently “passed like specters from another world.” The second Ku Klux Klan had arrived.

Several days earlier, the Houston Post had announced the Klansmen’s appearance. Colonel William Joseph Simmons, the second Klan’s founder, spoke about its goals and objectives at the First Christian Church. His address, “The Ku Klux Klan, Yesterday, Today, and Forever,” was phrased in the rhetoric of “pure Americanism” and white supremacy. He praised the order for its role as the nation’s greatest benefactor and claimed that racial mixing would lead inevitably to the destruction of the white race.

Simmons founded the second Klan on Stone Mountain outside Atlanta, Georgia, in 1915. As late as 1920, it was still a chiefly Southern fraternal organization, although it would soon grow to more than 2 million members and encompass the Southwest, the Midwest, and the West Coast. Primarily responsible for this expansion was Edward Young Clarke, appointed in June 1920 as king kleagle, or chief recruiter, in charge of the Klan’s Department of Propagation. Under his direction, the secret order spread from Georgia into Alabama and Florida, and then into Arkansas, Oklahoma, and Texas. Its first Texas klavern (chapter) was organized in Houston in September 1920 as Sam Houston Klan No. 1.

Letter from the Editor: Confronting Jim Crow
From Das Zweiter to El Segundo, A Brief History of Houston’s Second Ward