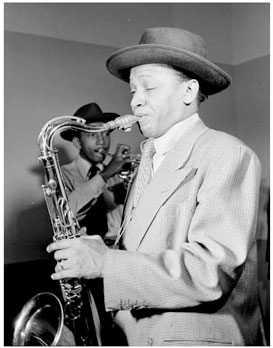 The integration of Houston jazz audiences followed a route of unexpected twists and turns that included the Catholic Church and the arrest of two jazz legends—singer Ella Fitzgerald and jazz trumpeter Dizzy Gillespie. The man behind this mayhem was Jean-Baptiste Illinois Jacquet, a tenor saxophonist from Houston, Texas.

Born in Broussard, Louisiana, in 1922, Jacquet moved to Houston’s Sixth Ward with his family at six months old. His mother was a Sioux Indian, and his nickname, Illinois, came from the Indian word “Illiniwek,” which means superior men.[i] Playing music ran in his family, with both his father and grandfather playing multiple instruments, and he counted his siblings among some of the many music teachers throughout his life. At age three, Illinois, one of six children, began tap dancing with his siblings for his father’s band and later played drums in the Gilbert Jacquet band until he discovered his true love, the saxophone. Illinois Jacquet went to Phillis Wheatley High School in the Fifth Ward and could not wait to start playing in the marching band, which, like the football team, rivaled Jack Yates High School in the Third Ward. 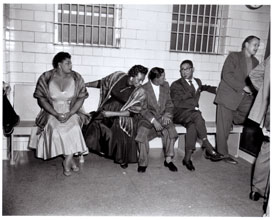 Reporters and photographers greeted the group upon their arrival at the police station—indicating that the operation was planned. From left to right: Ella Fitzgerald, Georgiana Henry, Illinois Jacquet, and Dizzy Gillespie. Photo courtesy of the Houston Metropolitan Research Center, Houston Public Library.

Discussing his time in Houston during segregation, Jacquet recalled, “When I was here I didn’t even know there was segregation in Houston until I would leave school or something and go downtown, and I’d see the signs because Phillis Wheatley was such a school [that] there was so much happening . . . they were winners in football team, basketball team, track. We had the best band at Phillis Wheatley, the better-looking girls, and they were light, just like white girls. They were black. They were all kinds. We didn’t think about segregation at that time. We didn’t realize that was really happening because we had such a great band, you know. . . .” As Jacquet grew older, he began noticing signs of segregation, but he maintained his focus on learning to play music and getting an education.[ii]

William Holland: A Mighty Lion at Yates
Letter from the Editor – NASA