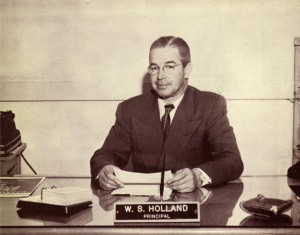 In 1958, Jack Yates High School moved from its original location at 2610 Elgin Street in the Third Ward to its current location at 3703 Sampson, just a short distance away. It should have been an improvement—modern building, larger facility—but instead it marked a reversal from the school’s position as a central, guiding force for the community.

Jack Yates High School was named for civic leader and Baptist minister, Reverend John Henry “Jack” Yates. It opened in 1926 as the city’s second “colored” high school to relieve overcrowding that resulted from the growth of the city’s African American population, which tripled between 1924 and 1929. James D. Ryan served as the school’s first principal until 1941, when William S. Holland succeeded him. During this time, the school acted as the community’s anchor. The building was the location for meetings and community events for the bustling African American community. Further, Holland not only ran the school, he also set the tone for expectations of success throughout the community.
Yates encompassed grades seven though twelve. The building on Elgin was intended to accommodate 1,600 students, but by the mid 1950s the student body was over 2,200. The overcrowding made the Southern Association of Secondary Schools try to revoke its accreditation, but Holland kept the school operating and became an outspoken advocate for the students until the a new facility could be constructed. When the new building opened, the Houston Independent School District (HISD) board replaced Holland with Dr. John Codwell, the principal from Yates’s staunch rival, Phillis Wheatley High School in the city’s Fifth Ward. This act destroyed the community’s cohesiveness and hampered its leadership. Once integration began in earnest in the 1960s, many of the black middle-class moved away, sealing the fate of the community as the neighborhood and the school declined. Over the last forty years, Third Ward has witnessed higher rates of poverty and crime, but its heritage and the memories of Professor William Holland remain alive.

The Dawn at My Back: A Memoir of a Black Texas Upbringing
Illinois Jacquet: Integrating Houston Jazz Audiences