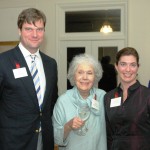 Jane Blaffer Owen, an arts patron, social activist, and preservationist, was the daughter of Robert Lee Blaffer, one of the founders of Humble Oil & Refining Company (now ExxonMobil), and the granddaughter of William T. Campbell, who established the The Texas Company, which became Texaco. She was born on April 18, 1915, and grew up in the family home at 6 Sunset Boulevard in Houston. She attended the Kinkaid School, and graduated from the Ethel Walker School in Simsbury, Connecticut. She studied at Bryn Mawr College and Union Theological Seminary. In 1941, she married Kenneth Owen, a descendant of New Harmony Utopian Society founder Robert Owen.

Recognized for her philanthropy in both Houston, Texas, and New Harmony, Indiana, Blaffer Owen was a life-long supporter of the University of Houston’s Blaffer Art Museum and a patron of the Moores School of Music and College of Architecture. She has received many awards and honorary degrees over the years. In 2009, Jane Blaffer Owen achieved the highest honor given by the National Trust for Historic Preservation, the Crowninshield Award. Although dividing her time between Houston and New Harmony, a historic town founded by her father-in-law as a utopian community, Blaffer Owen served as the first president of Allied Arts Council, as an early organizer of the Seamen’s Center, as a trustee of the C. G. Jung Education Center, and as a board member of the Sarah Campbell Blaffer Foundation—demonstrating her community activism in the Bayou City. Jane Blaffer Owen died on June 21, 2010, at the age of 95.

“If you can believe it, Bissonnett was a series of farms with cows and horses on those farms. Where the art museum now stands was a field of blackberries and buttercups. . . . J. S. Cullinan, bless his heart, developed Shadyside as one of the early residential sections, and it was far out . . . It seemed remote. Mother . . . was a great believer in candle light in the evening. Our house was described by some friends abroad as being so remote in the country that electricity had not yet reached [it.] . . .

When Daddy and Mommy were married, Will Hogg gave them a cow. Not many people give cows for wedding gifts, but Will Hogg did. They called it Wedding Bells, and he was always belled. At Shadyside, there were extra lots. As the houses were built, there would be less lots until finally—Wedding Bells the 7th because we kept having bells, wedding bells ringing all the time, one after another–Daddy came home one night and said, ‘Sadie, my dear, the last lot has been sold for a house. There will be no pasture for Wedding Bells, therefore, we will just have to give her up.’ It was a very sad day for the Blaffers when we couldn’t have our fresh milk at Shadyside. . . .”