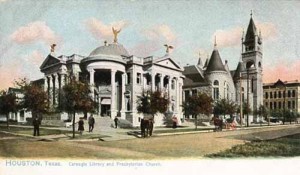 Clatter of light rail running down Main Street, cars roaring by, crowds gathering at the crosswalk champing to get on with the day—hectic life fills twenty-first century downtown Houston. But when a Houstonian takes a short stroll from the busy intersection of Congress and Main to nearby Sesquicentennial Park and wanders down the walk to Buffalo Bayou and its spanning bridge, the world changes. On this amazing walk of only a few blocks, 173 years fade away. As the visitor approaches the bridge, she’ll hear an 1837-era steamboat whistle (courtesy of the City of Houston) taking her back in time to when the Torrey brothers moved along the bayou looking for a band of Alabama-Coushattas, preparing to set up camp and do some trading.

Trading was so good for the Torrey brothers along that stretch of bayou, they decided to stay. In a grove of magnolia trees, they built the first frame house in Houston; at first a trading post but soon purchased by R. D. Taylor. It remained home for Taylor and his family for many years.

Other industrious folks headed for the nascent city founded by brothers John Kirby Allen and Augustus Allen only the year before. The city incorporated in 1837 and welcomed new citizens like Andrew Briscoe, a signer of the Texas Declaration of Independence and first judge of Harrisburg County (as Harris County was then known) who erected an impressive two-story home at Main and Prairie.

The Republic of Texas president, Sam Houston, in a letter to Senator Robert Irion (later the republic’s secretary of state) reported that in April, Houston had more than 100 houses and a population of 1,500. The city had new citizens—and more. It was now the capital of the new republic. Construction of the capitol building, appropriately located on Texas Avenue, began in April 1837.

On May 4, the Senate and the House convened and elected officers in the still unfinished building. The next day President Houston received an enthusiastic welcome and addressed the audience of legislators and citizens from a flag-draped podium. Thus began Houston’s two glory years as the republic’s capital. All too soon, on October 12, 1839, a crowd watched as workers loaded the republic’s furniture and records into waiting wagons. The next morning, President Mirabeau Lamar and an entourage of officials rode by the Capitol and saluted as they headed to the new capital of Texas, Austin. Later that afternoon, a sign appeared in a window of the now empty building, “For lease to responsible parties.”

Click here to view the pdf of the complete article.

Freedman’s Town: A Lesson in the Failure of Historic Preservation
Third Ward, Steeped in Tradition of Self-reliance and Achievement