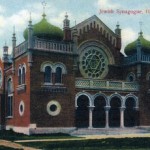 The term Rabbi in the original Hebrew means a teacher. In pursuing that calling, individuals have responded to the various needs of their Jewish community. In as much as Texas began as a frontier, Rabbis were called upon to meet an incredibly diverse set of needs.

In addition to the literal meaning of the word Rabbi, Jewish tradition views the three Hebrew letters of the word to represent an acronym. The abbreviation translates to shepherd of the children of Israel. Truly this appropriately describes Texas Rabbis.

I was twenty-nine years of age when I became the Rabbi of Temple B’nai Israel in Galveston in 1976. B’nai Israel is the oldest Reform synagogue in Texas, and the oldest extant Jewish community in the state. The average age of the Temple’s membership was seventy-nine and they regularly shared stories from their childhood. It quickly became apparent to me that if someone did not record these stories they would be lost as these folk died. For twenty-eight years I have collected these histories and the information in this article are based on that oral tradition.