By Houston History Magazine on July 12, 2011 in Communities, Religion, Women 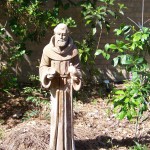 A group of Roman Catholic Sisters has greatly influenced most of my adult life by teaching me to meet life’s challenges head on. Their example of acceptance of life’s realities served as an important guide in my struggle to find meaning as I confronted a world and life that demanded changes in my thinking and ways of being. It may seem unexpected to use the word adaptation and begin an article about a congregation of religious women with a quote from Charles Darwin, but read on to learn about this exceptional group of women.

I first met the Cenacle Sisters at their retreat center in New Orleans in 1961. I was twenty years old, already married for a year, and struggling to find my role in life. I had concerns about being a better Catholic and a good wife. A miscarriage earlier that year caused me great sadness in a world that said, “Don’t cry, you’ll have plenty of babies.” But I knew that this one baby was my specific loss. I needed a place to grieve and learn to trust again.

The retreat was silent. The sisters’ religious clothing included pleated caps that surrounded their faces and long veils that trailed down their backs. They looked mysterious as they moved in silent strides and appeared to hover like gentle spirits over the floor. Their long black skirts barely rippled as they moved forward with their short purple capes covering almost immovable shoulders. The sisters sat in a special part of the chapel for the Mass and other times of prayer called the Divine Office.  The only man at the retreat was the rather stern priest who gave talks, said the Mass, and served communion. The sisters spoke very little. I found peace and order in the house and gardens–a place apart, a place to heal from the loss of my first pregnancy and to nurture the longing for order and peace in my life apart from my husband and friends.

Shepherds of the Children of Israel
J. W. E. Airey, the Cowboy Priest