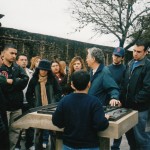 [It has been suggested that] we should change our name to Hispanic Studies to reflect the diversity of the Hispanic community But first of all, historically speaking, this earth here is Mexican earth and it is filled with Mexicans’ sweat and blood. We are the largest group of all Hispanic groups, especially in Texas. The rich history of the Alamo, San Jacinto battlegrounds, and our relationship with Mexico . . . is very strong and very prominent.

Initially, it proved challenging to find a permanent director. The university twice turned to graduate students as interim directors and once to an assistant professor because few Mexican Americans held positions as professors either at the university or nationally. Guadalupe Quintanilla, a doctoral student in the department of curriculum and instruction in the College of Education, became the program’s first director. Serving until 1978, she received $25,000 for the program from the state legislature with the assistance of then Texas Representative Ben Reyes largely as result of MAYO representatives lobby for the funds. Quintanilla fostered courses in literature, culture, politics, history, and folklore; began recruiting faculty and instructors; established a certificate in Mexican American Studies; and vigorously promoted the program to the public. Margarita Melville, an assistant professor of anthropology, served as the second interim director for one year. Hired in 1975 in a joint appointment, Professor Melville was the first Mexican American professor in the department of anthropology. The program named Victor Nelson Cisneros as its third interim director. Cisneros, a doctoral student in history at UCLA, had come to Texas to gather information for his dissertation.

This succession of interim directors made it possible for the university administration to turn a blind eye to Mexican American Studies and delay its funding. When the search for a permanent director continued to prove unsuccessful, members of the faculty approached me to assume the directorship. The year was 1980.