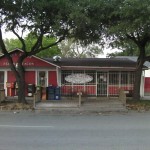 From their beginnings, restaurants have served as more than just places to eat; people use restaurants as social centers and community landmarks. This is especially true in ethnic neighborhoods, where minority entrepreneurs have historically used their establishments to engage in civic activism. Doneraki Authentic Mexican Restaurant, Merida Mexican Café, Villa Arcos Taquitos, and Andy’s Café are long-standing Houston institutions whose political involvement remains as well-known as their house specialties. From hosting campaign-stops to providing a place to catch up on local political news, these four establishments played important roles in Houston’s political scene.

The discussion of food and politics in Houston would be incomplete without due recognition of Felix Tijerina. Tijerina (1905 – 1965), Houston civic leader and original owner of Felix Mexican Restaurant, became “the most recognized Mexican American business success story in Houston.” Most importantly, Tijerina and others of his generation began a level of civic activism that influenced events from the 1920s to the mid-1960s, using restaurants to strengthen their connection to the Mexican American community. Felix’s became the unofficial gathering place for many groups and clubs from the 1930s forward.

At the time that these four establishments opened for business, the political scene in Houston looked and felt different. In 1966, the Houston Mexican American community’s won its first victory to a major political position–Magnolia Park’s Lauro Cruz won the State Representative District 23, position. In 1969, a record number of Mexican Americans ran for office. By 1975, three elected Mexican American officials served in major positions.

Along with the rise of Mexican Americans in more powerful positions in Houston came a national change in attitudes toward Mexican food. Books published in the 1970s defined Tex-Mex food as a purely American regional cuisine and highlight the growing interest in ethnically diverse foods among Americans. Houston’s economic boom in the late 1970s and early 1980s Houston experienced an economic boom brought an influx of Mexican immigrant laborers who demanded Hispanic businesses. A rise in immigrant and minority entrepreneurs catered to this previously untapped Hispanic market.

Within this environment of change Doneraki, Merida, Villa Arcos, and Andy’s were established. I sat down with the owners and managers of each of these eateries, and they shared their stories with me.

Finding A Way: Developing the Center for Mexican American Studies at UH
The Chicano Movement in Houston and Texas: A Personal Memory