By Houston History Magazine on December 2, 2011 in Houstonians, Race & Ethnicity, University of Houston 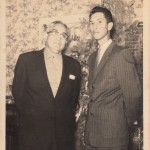 Sometimes life takes on an unexpected journey. Tatcho Mindiola, Jr.,  director of the Center for Mexican American Studies (CMAS) and associate professor of sociology at the University of Houston, started out studying to be a businessman. Fortunately for the many students whose lives he has impacted, his own life took a different turn.

Mindiola was born and raised in Houston. His father, Tatcho Mindiola, Sr., worked as a baker, while his mother, Hortencia Rocha Mindiola,  cared for their six children. In the early 1940s, they became one of the first Mexican American families to move to Sunset Heights, a part of the Heights on North Main Street between 28th and 29th Streets. There Mindiola developed an awareness of the separation between whites and blacks—both geographically and socially. At the Polish beer and dance hall, a partition separated patrons by race. At his uncle’s café on Center Street and at the Catholic Church the family attended, blacks and whites sat on opposite sides of the facility.  At these locations, Mexicans would be seated in the white section, but at other times they too experienced exclusion as Mindiola discovered growing up and attending Houston public schools.

From the Oasis of Love to Your Best Life Now: A Brief History of Lakewood Church
The Fight for Bilingual Education in Houston: An Insider’s Perspective