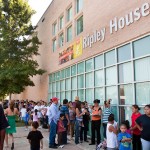 The turn of the twentieth century marked a period of accelerated population growth for Houston, and Houston’s Second Ward followed suit. The people who moved to Houston came from a wide array of countries and from other states. Many of these people settled into the aging housing stock located in the Second Ward. The more well-to-do and better established families began to migrate away from the city center and toward the newly developed street car suburbs south and west of town like Montrose, the South End, and the Heights, named for their locations on early street car routes.

The influx of new Houstonians came during the city’s infancy, and few, if any, social welfare programs existed. In February 1907, a group of twelve influential and civic-minded Houston women met at the home of James A. Baker under the leadership of his wife, Alice Graham Baker (grandmother to future Secretary of State James A. Baker III). They wanted to form a “Settlement Association” based on the national settlement house movement. The U.S. movement was modeled after London’s Toynbee Hall, established in East London in 1884 by Samuel and Henrietta Barnett. Located in one of the poorest, most crime ridden, and underserved areas in London, Toynbee Hall sought to “bring the most privileged—the future elite—to live in the poorest area of London, a privilege for which they had to pay.”  The experience gained would, in turn, help to educate the country’s future leaders about the need for social change.  This same notion of public service inspired those twelve Houston women more than one hundred years ago.