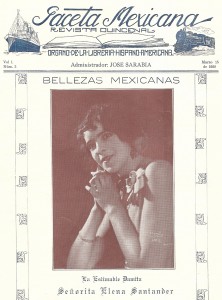 In 1836 newcomers from the United States along with their Tejano (Texas Mexicans) allies, took up arms against the Mexican government and successfully seceded from that nation. Following the Battle of San Jacinto, which ended the Texas Revolution, Texians (Anglo Texans) ordered Mexican prisoners to clean the swampland on which Houston would be built. Afterwards, most would be sent home, but many stayed, creating the starting point of early Mexican settlement in the Houston region.

Between 1836 and 1900, Mexicanos lived on the outskirts of Houston coming in to town mostly to find work. By 1900, they began to settle permanently within the city, occupying a region southeast of downtown called the Second Ward (Segundo Barrio), which quickly became the unofficial hub of their cultural and social life. After 1900, approximately 1,000 Mexicans Americans lived in Houston. Showing tenacity and creativity, they formed a viable community with networks of businesses, organizations, and religious and cultural institutions. By 1910, an estimated 2,000 people of Mexican extraction lived throughout the city.

Mexican Americans worked in most industries and established a variety of businesses which would lay the foundation for a bustling Mexican American economy.  Traditionally, they worked as tailors, clerks, cooks, and boot makers, like Feliciano Medel who helped make Houston a capital of western boot making. Many worked in the oil refineries, on railroad shipyards, or on crews building the Houston Ship Channel.

Mexican Americans also established a variety of social, cultural, religious, and political organizations to provide support to the budding communities. El Campo Laurel, considered the first Mexican American organization in town, was established in 1908 and offered services ranging from recreation to insurance. Other self-help organizations included Mutualista Benito Juarez of Magnolia Park and Pasadena’s Mutualista Miguel Hidalgo. One of the most influential and business savvy organizations to form during this period was Club Femenino Chapultepec, which was founded by women in 1931 to secure jobs for Mexican Americans in Houston’s slowed but steady business sector. All of these early clubs played an important role, at times offering the only protection for a people with few public resources.