By Debbie Harwell on March 7, 2012 in Food, Houstonians 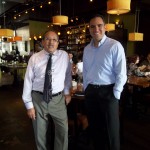 Sonny Look impacted the lives of many of his employees and the lessons they learned working in his restaurants opened new opportunities. One such person is Tony Vasquez, co-owner of Chimichurri’s South American Grill, a successful waterfront restaurant in Kingwood.

Tony began his restaurant career as a busboy and started working for Sonny Look as a server at the Sir-Loin Inn around 1969. He transferred to the Sir-Loin House and then to Don Quixote’s where Sonny promoted him to assistant manager. He worked with Look at the Depot when downtown was a popular nightspot. He would have continued working for Look but left after the restaurants closed.  “I was very, very happy working for Mr. Look,” Tony recalled.

At Sonny’s restaurants, Tony learned about exceptional service and food quality; but, most importantly, he found someone who shared his passion for the industry. Tony remembers,   “Mr. Look had the business in his heart, which is what I learned. Because everything I do, I learned it from him. I open my heart when I am at the restaurant  . . .  Mr. Look used to go around to every table in every restaurant. . . . Everybody knew Mr. Look.”  Tony reflected on how Sonny made the rounds of tables in each restaurant, talking to customers and pouring water and his rosé wine,  “I haven’t seen any owner of any restaurant that I worked for that the owner goes around the tables and talks to the people.”

Tony always aspired to open his restaurant, but that takes money and experience.  Once, Sonny offered to help him, a gesture that Tony appreciated, but  he was not ready.  In April 2008, however, the time was right. Tony along with his son-in-law and co-owner, Ronald Perez, opened Chimichurri’s, an upscale, comfortable, lakefront restaurant offering a quality dining experience.

The whole family, including Tony’s wife, Rosa, and their daughters, have been involved in every step of the thee-year process to realize the dream of owning their own restaurant—even down to  the most minute details of the décor. The cuisine includes elements from many South American countries and recipes incorporate specific items from those countries. Tony follows the example he learned from Sonny, visiting with the customers. “We put our heart into it because this is our own,” he said.  Ronald Perez added, “Consistency is our main concern” when it comes to food and service.

Now Vasquez and Perez are expanding the operation.  This spring, they will open a new restaurant next door, Puerto. With cuisine based on the taco stands of Mexico City, it will provide a nice atmosphere with unique offerings where families can get in and get out quickly or linger. Although the atmosphere is casual, it will have the same standards of service and quality that Tony learned from Sonny all those years ago.