By Debbie Harwell on November 26, 2012 in Arts & Culture, Museums, University of Houston 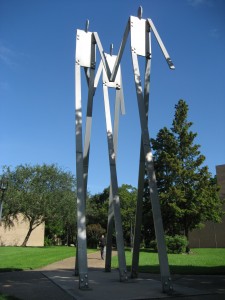 As the University of Houston has made its push for Tier One status, what many people do not realize is that since the 1960s UH has been building a Tier One art collection that is one of the city’s best kept secrets.  With the campus in the midst of a building boom in 1966, the Board of Regents and President Phillip Hoffman pledged to dedicate one percent of future construction costs to acquiring works of art. The first state institution to make such a promise, UH recognized that works of art both beautified the campus and enhanced the University’s prestige.

Found boldly marking the outdoor landscape as well as tucked away inside campus buildings, the public art collection traces artistic trends over the last half century and features the work of artists in a variety of mediums. The acquisitions began with the Orbit I and Orbit II Orbit II by Masaru Takiguchi and include Frank Stella’s mural Euphonia commissioned for the Moores Opera House, and the recently installed Statue of Four Lies by UH alums, The Art Guys. Almost 300 pieces of public art can be found on the main campus with another 150 at locations throughout the UH System.

Matrimony and the Mayors: Three First Ladies of Houston
The Hall of Honor: Tier One Athletics