By Houston History Magazine on November 26, 2012 in Education, Houstonians, University of Houston

Birch Blaylock, considered the first student to register in 1927 at what became the University of Houston, expressed astonishment when he returned to the campus forty-four 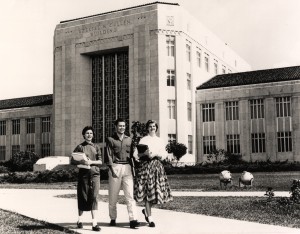 years later for the first time in the early 1970s: “Imagine having 366 acres and 46 buildings. We had to scramble for a classroom at old San Jac. They moved us all over the place.” (In Time, p.43)  No doubt students from the 1970s are astonished when they return to the campus today.  Indeed, university has grown so rapidly over its 85 year history that each generation of students has experienced a somewhat different place.

Some of UH’s first graduates have left their marks on the city, some in big ways and others in ways more subtle but nonetheless significant contributions. Judge Roy Hofheinz, who got his law degree at UH in 1931 at age nineteen, went on to serve in several state and local elected positions, including Harris County judge from 1936 to 1944. Most importantly, he helped bring Major League Baseball and the Astrodome to Houston. Less well known is Edith Carlton Lord. She broke barriers as one of the earliest women students and one of the few who was married. She competed on the 1934 women’s basketball team, which along with men’s ice hockey comprised the UH athletics program. In addition, she represented UH at intercollegiate debates as one of two women on the six-student team. By 1935, Lord had joined the faculty where she inspired others to reach beyond society’s limitations.

The growing number of former students who wanted to maintain contact with and sustain the University led to the formation of the University of Houston Alumni Association (UHAA) in 1940.  Today it has over 18,000 members who subscribe to the organization’s core values: commitment, leadership, integrity, inclusiveness, fun, and teamwork.  Most of the segments that follow, featuring alumni from each decade since UHAA’s founding, are written from interviews done by Jeff Sutton, the association’s director of communications. Two are drawn from articles written by Michelle Klump for the “You are the Pride” series at UH. While things have changed from the 1940s until today, one thing remains constant in the these alumni reflections on the University of Houston: UH provided them a gateway to opportunity, and each witnessed the positive impact that the University of Houston has had on the community as a whole.