By Houston History Magazine on July 12, 2013 in Arts & Culture, Houstonians

Houston proudly showcases many works of art by Frank Teich (1856-1939), an early Texas sculptor originally from Germany. Teich began painting at age eight and upon graduation from the University of Nuremburg, he served as apprentice to the German sculptor Johannes Schilling; it is speculated that Teich worked on the German national
monument, The Watch on the Rhine.1 His artistic skill combined with business savvy enabled him to succeed in America, settling near Llano, Texas, where he bought a granite quarry that supplied rock for his statues and monuments now seen throughout Texas.

In 1878, Teich emigrated from his hometown of Lobenstein (now Bad Lobenstein), Germany to the United States. He came with no knowledge of English, lived initially with grandparents in Wisconsin, and traveled broadly about the 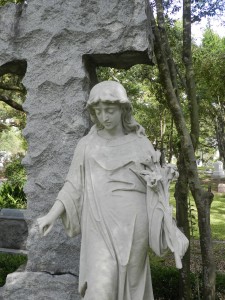 country. In Chicago, where the Cook County Courthouse was under construction, he showed the superintendent his drawings and was hired to supervise a crew of stonecutters. Upon the building’s completion, Frank Teich moved to St. Louis, where he worked until he had saved $600 to go to California. While working in a land office and traveling about the state, he heard about the discovery of gold in South Dakota. Putting together a crew of Chinese workers in San Francisco, Frank took them to the mining district of the Black Hills. From there, he returned to St. Louis, where he worked until 1883, accumulating enough money to travel to Texas, where he remained.