In 1901, Texas businessman, art patron, and amateur historian James T. DeShields commissioned two paintings intended to represent the height of heroic valor in the two most important battles of the Texas Revolution. Each canvas 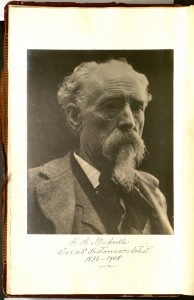 was to be five by seven feet in size, and each artist was to be paid $400 for his labors–Robert Jenkins Onderdonk for The Fall of the Alamo (a work which DeShields fondly called Crockett’s Last Fight), and Henry Arthur McArdle for The Battle of San Jacinto (adapted from his much larger painting bythe same name completed in 1895). The larger San Jacinto painting has graced the Senate Chamber of the Texas State Capitol for the past century, where it is paired with McArdle’s last great work, Dawn at the Alamo. Onderdonk’s portrayal of David Crockett’s last moments found a permanent place in the Front Entry Hall of the Texas Governor’s Mansion more than three decades ago. But its companion piece, McArdle’s smaller Battle of San Jacinto, had until its dramatic discovery in 2010 spent an even longer time moldering in a West Virginia attic. The painting’s reemergence offers an opportunity to reexamine just what DeShields, Onderdonk, and McArdle believed they were doing when they sought to bring history to life with the paintbrush as well as the pen.