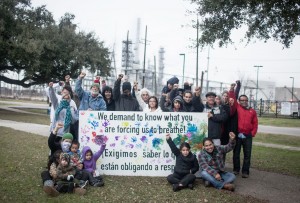 JUAN PARRAS, executive director of Texas Environmental Justice Advocacy Services (TEJAS), was born in Big Spring, Texas, in 1949. Following his high school graduation from St. Anthony’s Seminary in San Antonio, he took courses both at St. Mary’s University and the University of Houston. Juan Parras dedicated his professional life to  ghting injustices, first with Harris County social services, then with AFSCME, a national public services employee union. He later used his unionizing skills to provide organizational support for the community of Convent, Louisiana, in their  fight for environmental justice. Eventually, Green Peace hired Parras, a move which he believes was the organization’s fi rst permanent Latino appointment in the nation. He worked with them on the “Toxic Campaign” against polyvinyl chloride (PVC) before budget constraints ended his job. From there, he did community outreach work for the Texas Southern University – Environmental Law and Justice Center, which led to the founding of TEJAS. Parras, who resides in Segundo Barrio, sat down with UH-Oral History of Houston director, Natalie Garza, in August 2009 to talk about his work.