By Houston History Magazine on November 20, 2013 in Arts & Culture, Letter from the Editor, Music 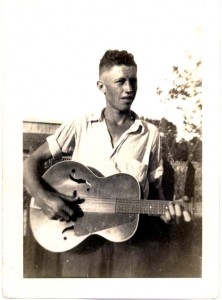 The Houston region has a long musical tradition with diverse styles ranging from country to zydeco to blues to rock and roll to gospel–and everything in between.  Our current issue captures many parts of this musical heritage, with the important exception of classical music. Indeed, it barely mentions Hank Williams and has nothing to say about George Jones, one of the most famous of our region’s country singers.

Hank Williams is the Beethoven of the southern United States, home to generations of country boys who ordered store-bought guitars from the Sears catalogue and picked out tunes while listening to the Grand Ole Opry.  Williams escaped poverty with mournful songs about loving and cheating and drinking. He toured the South by car, playing in honky tonks while circling back on weekends to perform at the Louisiana Hayride in Shreveport or the Opry in Nashville. When he died of hard living on New Year’s Day of 1953 at the ripe old age of twenty-nine, he left a legacy of classic country songs and a legend of a rich little poor boy struggling to cope with fame and fortune.

George Jones followed the lead of Hank Williams, who was eight years his senior.  Jones was born and raised in small towns and rural communities outside Beaumont. Like Hank, George rose from rural poverty to country music stardom.  One of eight children in a family of singers, he played for pocket change on the street corners of Beaumont as an adolescent.  He married at eighteen and divorced at nineteen; in the divorce papers his wife noted that he was “a man of violent temper” who was “addicted to the drinking of alcoholic beverages,” two traits he shared with his father.

Early in his career, Jones worked briefly with Hank Williams, who became his hero and role model because of the “way he delivered songs.” Although Jones was no match for Williams as a songwriter, his soaring voice allowed him to sing each song with great feeling.  Frank Sinatra once called Jones the second best singer in America, and country and pop music fans showed their agreement by buying his records.  From his early twenties into his fifties, Jones built a formidable songbook while also exploring the depths of alcohol and drug addiction.  His fans remained loyal even after he earned the nickname “no show Jones”; they excused frequent binges and missed shows as the price paid for the depth of feeling in his voice.  One of his best ballads, “Choices,” is an apology to those he hurt along the way: “I was tempted; from an early age I found I liked drinkin’, and I never turned it down. There were loved ones, but I turned them all away, livin’ and dyin’ with the choices I made.”  Country singer Moe Bandy’s great song,’ “Hank Williams, You Wrote My Life,” could have been written for Jones.

Yet Jones lived well past the twenty-nine years of Hank Williams. In his fifties, this “good-timing man” took a “good-hearted woman” for his wife, and she helped him settle down and live to the age of eighty-one. Despite bumps along the way, he continued to tour until his death.  In his last decades as a performer, he had trouble finding either songs or the strength of voice to cut through the clutter that is modern country music, but his death in the spring of 2013 brought an outpouring of praise by those who remembered the power of his voice in his prime.

County music taught its young listeners about true love, and our spouses have been trying to reeducate us for the rest of our lives. It also taught us important lessons about the flexibility and creativity of the English language. We absorbed lyrics such as “No more lookin’, I know I been tooken” and “Ain’t had no lovin’ like a huggin’ and a kissin’ in a long, long while.”  Our junior high teachers tried in vain to teach us the difference between southern English and real English, but what did they know about the poetry of Hank Williams? Some of us have lived our lives to a soundtrack of Hank, George, Merle Haggard, Willie Nelson, and Johnny Cash.  My old ears tell me that we could have worse than classical music.