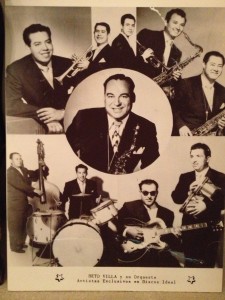 Feet start tapping and people are drawn to the dance floor by the upbeat polka sound of the accordion and the bajo sexto keeping rhythm.  Men wearing tailored suits lead women in strappy sandals or black heels as the mid-calf hemlines of their dresses flow with every spin.  In the midst of the music, crowds are heard chatting at their tables seamlessly transitioning between English and Spanish, and as if part of the ambient sound, the clanking of beer bottles carried by thirsty patrons fills the air.  In 1930s Houston, Mexican Americans enjoyed this vibrant atmosphere on any given weekend.  Over the last nine decades, the Mexican American music scene in Houston has benefitted from locally grown talent that meets the cultural and entertainment needs of its community by integrating a variety of musical stylings and genres.

The 1930s witnessed a boom of Mexican American musicians in Houston dominated by two forms of music, the conjunto and orquesta Tejana. This regionally grown music became known collectively as música Tejana, defined by historian Guadalupe San Miguel Jr.  as all the musical forms and styles listened to by Tejanos since the nineteenth century, rather than a single genre. One of the most recognizable identifiers of the conjunto is the use of the bajo sexto and accordion. The conjunto was connected with working-class Mexican Americans and comprised of musical styles such as the corrido and canción ranchera associated with an agrarian past.

To read the pdf of the full  article click here.

Rockin’ and Boppin’
Letter from the Editor: Classical Music in Houston