A Conversation with Larry Gregory and William H. Kellar 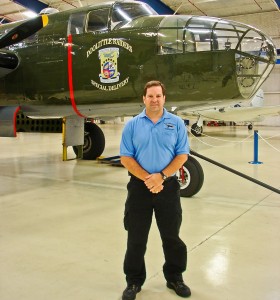 In November, 2008, just two months after Hurricane Ike devastated Galveston, historian William H. Kellar drove to the island to interview Larry Gregory, president of the Lone Star Flight Museum and the Texas Aviation Hall of Fame, for a “Conversations with…” feature that appeared in the Spring 2009 issue of Houston History magazine. The museum, which first opened in 1990, and its priceless collection of mainly World War II aircraft, suffered terrible damage from the effects of the hurricane. At the time, Gregory talked about the storm, the cleanup, and his hopes for the future. In 2011, the museum announced it planned to move from Galveston’s Scholes International Airport to higher ground at Ellington International Airport, further inland and closer to Houston. Recently, Kellar wondered how the museum was fairing and made the trip to Galveston for a follow-up interview with Larry Gregory. The following “Conversation” is based on Kellar’s interview with Gregory, June 24, 2013.

William H. Kellar (WHK): The last time we visited here was in 2008, and you were just getting things cleaned up after the hurricane.

Larry Gregory (LG):   After Ike, we opened on January 31, 2009, and it was pretty rough at the beginning. We still had a lot of parts and debris in the back of the second hangar and really only half of that hangar was open. We have since been able to reorganize and now almost all of hangar two is accessible. It looks a lot better now than it did after we first reopened. We were glad we had the doors open and the lights on to start getting back to a sense of normalcy. That helped the general psychology of the organization more than anything – just getting back to business. It is one of my proudest moments to be able to reopen and to somehow keep this thing going. It was only made possible by the hard work of our staff, volunteers and support we received from the community.

Art without Artifice: The Menil Collection
On Track: The Museum of the American G.I.