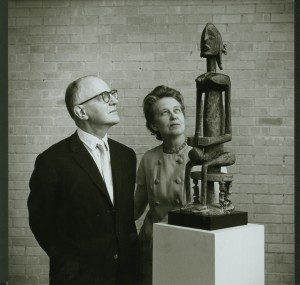 Tucked away in the heart of a Houston suburb, among generous green park space and snug, grey-clapboard bungalows, the unexpected is made manifest in the Menil Collection. An internationally-renowned arts destination identified only by a small, inconspicuous sign, the Menil is a recognized Houston landmark that, for all its importance, still bears a remarkable sense of simplicity. With its understated grey and white edifice blending seamlessly into the surrounding neighborhood, the Menil’s quiet elegance belies its rich interior: a haven for ancient, tribal, and contemporary art. Despite its unassuming aura, the Menil Collection has garnered a reputation for being both eccentric and exceptional. Possessing a unique aesthetic that succeeds in drawing the public into an intimate contemplation of the artwork itself, the museum does its work sans audio guides, wordy plaques, or crowded walls. Completed in 1987, this corner of Houston was the magnum opus of one unconventional, hugely influential Houston couple: John and Dominique de Menil.

Originally from France, the de Menils fled Europe during the Second World War. Dominique followed her husband separately, along with their children, to Houston in 1941. The daughter of Conrad Schlumberger, a physicist who helped found the oil services company Schlumberger Limited, Dominique grew up in a bourgeois Protestant household, the child of practical, if conservative, parents who did not believe in spending money on frivolous things like fine art and other luxuries. John, meanwhile, the son of a career Army officer, grew up poor, but ambitious, leaving school early to support his family as a banker, while still managing to earn his baccalaureate and graduate degrees in political science by taking night classes. By the time the couple married in 1931, John was employed as the head of investment services at one of the largest banks in France. However, in 1936 he began to work for the family company, eventually becoming president of both the Middle and Far East and Latin American branches of Schlumberger Limited.