By Debbie Harwell on October 31, 2014 in Archives, Business and Industry, Energy and Environment 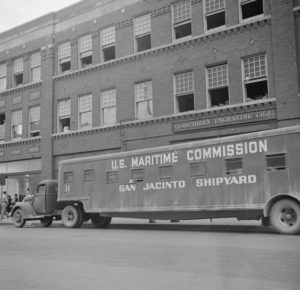 The U.S. Maritime Commission provided transportation during World War II to be sure the workers could make it to the shipyard. Photo courtesy of the Library of Congress.

The success of the Houston Ship Channel and the Port of Houston is built on more than the determination of businessmen, however. Since its earliest days the city has acted as a magnet for people coming here to look for work, particularly in jobs associated with the ship channel and the burgeoning industries along its banks. Whether building the railroads to transport goods to and from the port, loading and unloading the ships that called here, or navigating vessels and barges along the waterway, the people—the Houston workforce—have made this economic engine successful.

The photos featured below are in addition to those featured in the print article. 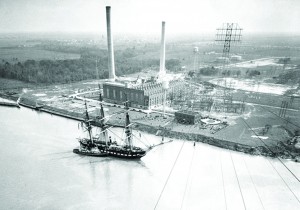 “Old Ironsides” visited Houston in 1932, making her way along the ship channel amid the backdrop of local industry. Photo courtesy of the Port of Houston Authority. 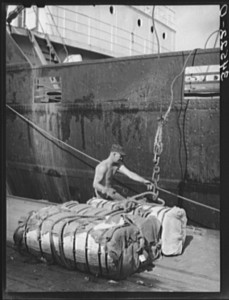 Loading ships the old fashioned way could take over a week int he era before containerization. Photo courtesy of Library of Congress. 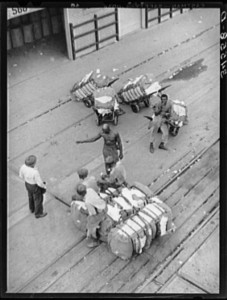 Dock workers prepare to load cotton on a ship in Houston. Photo courtesy of the Library of Congress.