By Houston History Magazine on March 26, 2015 in Archives, Business and Industry, Education, Houstonians, University of Houston 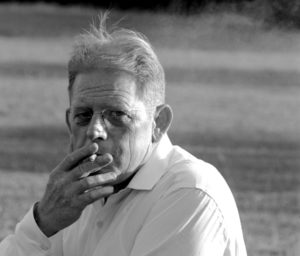 One of Houston’s most important literary figures was the late writer and novelist Donald Barthelme (1931–1989). But for many years Barthelme labored in the shadow of his better-known father, Donald Barthelme, Sr. (1907–1996), a nationally prominent architect. A native of Galveston, the senior Barthelme trained at the University of Pennsylvania and first gained attention in 1936 as the lead designer for the Hall of State, the principal building of the Texas Centennial Exposition in Dallas.2 In 1948 he won an award from the American Institute of Architects for Houston’s St. Rose of Lima Catholic Church, applauded for its simple Scandinavian modern forms.

Yet Barthelme made his reputation with the West Columbia Elementary School of 1951, which won many awards and was recognized internationally. Its innovative design departed from the traditional practice of placing classrooms along both sides of a long corridor. Instead, Barthelme arranged the building around two large courtyards; classrooms opened to the courts through floor-to-ceiling glass. This flooded the rooms with light while providing a sheltered environment for the students. At the main entrance a flamboyant scalloped canopy greeted visitors.